How dangerous is it to be a journalist in Ireland 20 years after the murder of Veronica Guerin? 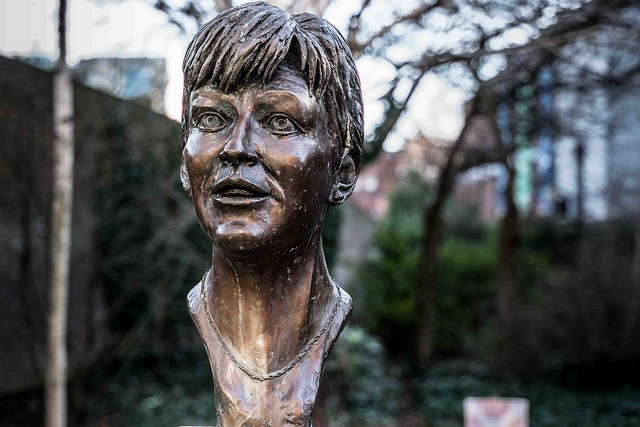 This weekend marks 20 years since the murder of Irish award-winning crime and investigative journalist Veronica Guerin. On 26 June 1996, two masked men on a motorbike pulled up alongside her car at traffic lights on the outskirts of Dublin, opened fire and killed her instantly. Three men were subsequently convicted for their involvement in the murder.

Guerin, who had been working as a freelance journalist for Ireland’s Sunday Independent, made a name for herself investigating and exposing the crimes of senior members of Dublin’s criminal underworld. But such a reputation can be a dangerous thing for an investigative reporter to have. Guerin was subject to a number of attacks and threats, including against the life of her young son Cathal. In 1995 she was shot in her home but survived. Refusing to yield, she continued her work.

“Veronica was a late entrant to journalism; she trained and worked initially in accountancy so she had an instinct for business and understood money,” says Séamus Dooley, Irish Secretary, National Union of Journalists. “That was very useful in studying records and following the money.”

Her death prompted a wave of public anger culminating in the establishment of the Criminal Assets Bureau, followed by more than 150 arrests and a major hunt for organised criminal gangs. “The idea of a designated bureau with sweeping powers to target those with suspicious wealth was a direct response to her murder and caused havoc among those heading criminal gangs,” says Dooley.

Guerin’s death was described by then-Taoiseach John Bruton as a “an attack on democracy”. Unfortunately, this sentiment was echoed earlier this year when current Taoiseach Enda Kenny said: “Journalists and media organisations will not be intimidated by such threats, which have no place in a democratic society.”

The threats he was referring to were made in February 2016 by criminal gangs in Dublin against a number of crime journalists in the city who were reporting on a gangland feud that saw two audacious murders in the space of four days. Police informed Independent News and Media, which owns the Irish Independent newspaper, that the safety of two reporters — a man and a woman — was at risk.

Jimmy Guerin, the brother of Veronica, said at the time: “Successive governments have let down the memory of Veronica … by failing to provide the resources required to beat the gangs.”

So are we back to the way things were two decades ago?

“The situation has been simmering beneath the surface for a while, but the turf wars between the Kinahan and the Hutch families, along with the nature of the violence, is new,” says Dooley. “Gerry Hutch is someone Veronica would have covered in her time, so there is a direct connection with what came before.”

“However, there was this perception that Dublin was a city on lockdown following the killings and journalists are operating under fear,” adds Dooley. “This isn’t bandit country, and there aren’t large numbers of journalists fearful for their lives.”

This shouldn’t mean complacency, adds Dooley, who states that the NUJ has supported a number of journalists at risk in Ireland in recent years.

“One of the problems is that Dublin is a small city, so, naturally, the number of people covering crime is very small,” says Dooley. “Veronica was very well-known to the people she was writing about and so are today’s reporters.”

With crime reporting being such a small part of the market, there is great pressure to deliver stories quicker, which brings problems in itself.

“Today’s journalists are expected to take more risks, and freelancers — as Veronica was — take even greater risks than those in staff jobs,” says Dooley. “While I understand that there is also the commercial element of selling newspapers in order to survive, sensationalising crime coverage in such a high profile way and being overly provocative in the process of selling comes at a price.”

A similar situation exists in Northern Ireland, which remains a difficult place to be a journalist. In September 2001, Martin O’Hagan, a journalist with the Sunday World, became the first journalist to be killed in Northern Ireland since the outbreak of the Troubles in 1969. He was murdered by loyalist paramilitaries as he walked home from a pub in Lurgan, in what was widely believed to be retaliation for his investigations into drug dealing by these same gangs.

His murder remains an isolated case, but recent years have seen a spate of attacks and threats against journalists in the country. In 2014, Irish News reporter Allison Morris was called a “Fenian bastard” and a “Fenian cunt” as she left court by a gang who threatened to cut her throat.

In July the previous year, the NUJ condemned the “upward trend” in attacks on journalists in Northern Ireland after a French photographer was assaulted during rioting in East Belfast. Two months earlier death threats were issued by loyalist paramilitaries against two journalists in the region. Dissident republicans have made similar threats in recent years.

These are not isolated incidents in either the north or south of Ireland.

If we are to learn anything from the death of Veronica Guerin all these years later, says Dooley, it is that “there needs to be greater recognition of the rights of journalists.”