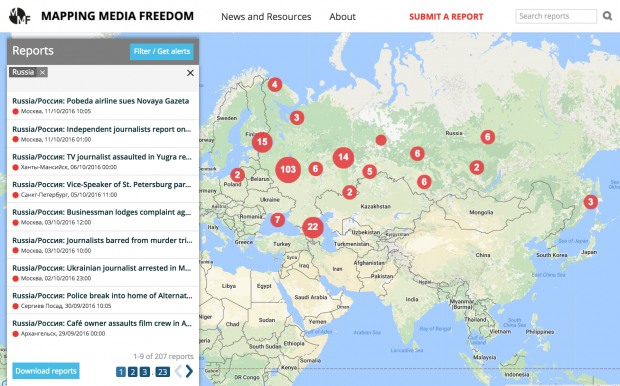 Russia’s recent elections have been described as “the dullest in recent memory”. But as Index on Censorship’s Mapping Media Freedom (MMF)  project shows there was no shortage of media violations and claims of voter fraud.

On 18 September, the day of the vote, journalists across Russia were denied entry, attacked and arrested while attempting to monitor polling stations.

Rosbalt, a Russian news website, reported several instances of journalists – among them reporters for the BBC – being escorted out of a polling station by police officers and employees of the Vasileostrovsky district administration.

Further reports of journalists’ rights being violated in Saint Petersburg were widespread.

In Siberia, reporters were obstructed even from entering polling stations. A number working for Reuters were denied entry after officials at the location said they needed permission from local authorities but there is no law requiring this of international reporters. A voter claimed the counter used by a Reuters reporter to keep track of people voting was actually a radioactive device, and the reporter should be removed. This was not enforced.

A journalist in Samara was illegally barred from a polling station despite having the necessary accreditation. When the journalist tried to stay for the vote count, officials demanded additional accreditation, which does not exist.

Journalist Dmitri Antonenkov and an activist with the Public Monitoring Commission, Vasili Rybakov, were both detained at a polling station in Ekaterinburg while investigating the illegal use of the Russian state coat-of-arms in polling stations. The pair were detained for two hours and their identification confiscated without return.

MMF Russian correspondent, Ekaterina Buchneva, said: “In general, attempts to bar journalists from polling stations were very common. We saw a lot of reports from Saint Petersburg and Moscow but the investigation by Reuters (they sent journalists to 11 polling stations across central and western Russia) proves that it was common for the rest of the country too, but, unfortunately, remained under-reported.”

Another of MMF’s Russian correspondents, Andrey Kalikh, said: “What is common is that journalists monitoring elections are often threatened if they reveal voter fraud at a polling station. There were dozens of cases in the 2011-2012 election campaign (state parliament and presidential elections) where registered journalists were kicked out, beaten up or otherwise harassed.”

Vladimir Romensky, a reporter for the independent TV channel Dozhd, for example, was involved in an altercation at a polling station in Moscow. Romensky was visiting the station to verify information about voter fraud. Earlier in the day a member of the polling board told Romensky that certain ballots were marked for the United Russia party. A man who refused to introduce himself denied access to Romensky and his crew. While Romensky was inquiring, a nearby police officer called armed guards from the station. The guards demanded Romensky’s paperwork and, despite having all his documents, the guards forced Romensky and his crew out of the location.

In another incident, Fontanka news correspondent Dmitry Korotkov was investigating the process of “carouseling”, a form of rigging elections where a group of selected people vote multiple times in different polling stations. When asked whether or not carouseling is a recent trend, Kalikh said, “No, it is not. It has existed before, the most cases were registered in 2011-2012. But the [Korotkov] case… is one of the most outrageous ones.”

Korotkov received information that voters with a special passport stamp were given multiple ballots at a polling station in the Kirov district. Korotkov was able to receive the stamp and received four different ballots at the station, even though he was not registered for the district. The polling official allowed Korotkov to sign as another voter.

Korotkov reported the incident and the polling board promised to investigate. Instead, Korotkov was detained by police officers on charges of illegally receiving ballots. The police interrogated Korotkov and his case was taken to court on 28 September. The journalist could be facing charges of using someone else’s ballot in a general election; his case is still under investigation.

Buchneva said: “The Fontanka reported that after questioning Korotkov and a suspect, who acted as an election official and gave Korotkov ballots named after another person, ‘the judge apparently had no more doubt, that Korotkov signed for another person not to vote illegally, as it was stated in the police report’. However, it is too early to say that the journalist will not be punished.”

Journalist Dmitri Antonenkov and an activist with the Public Monitoring Commission, Vasili Rybakov, were also both detained at a polling station in Ekaterinburg while investigating the illegal use of the Russian state coat-of-arms in polling stations. The pair were detained for two hours and their identification confiscated without return.

Winning 54% of the vote, United Russia now has a majority in the Duma, allowing them to change the country’s constitution without the approval of other parties.