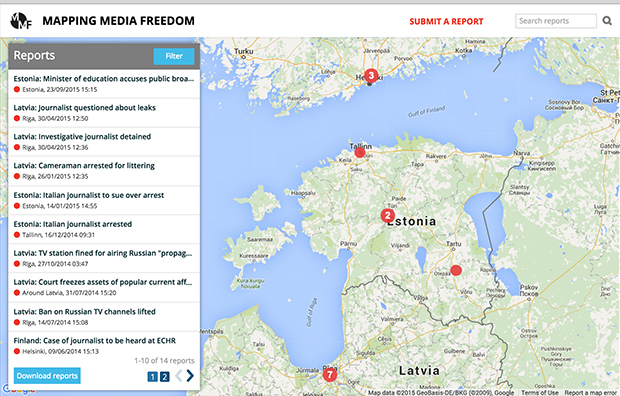 In late November 2014, Estonia’s parliament made a historic decision to launch a Russian-language TV-channel as part of ERR, Estonia’s public broadcaster. A year later the channel is a reality: ETV+, ERR’s third channel debuted on 28 September.

The launch passed quite quietly, compared to the reaction that greeted the decision to create the channel. There were discussions about what the opening of a Russian-language channel in Estonia would mean. Would it be a tool of government propaganda or a knitting together of Estonia’s two communities, Estonian and Russian speakers into one community? From Russia there were clear expectations of a counter-weight to Russian media, which is widely followed by Estonia’s Russian speakers.

Speaking at a media conference hosted by ERR in June 2015, the ETV+ chief editor Darja Saar — a Russian project manager with no media experience — described the goals of the new channel: “We gave up the classical media rules from the very beginning, when we decided that we are not going to tell people what is right or wrong. Instead, we will follow people’s wishes – they are tired of just words and want deeds.”

The new TV channel aims not only to be an informer, educator and entertainer in the mould of a classical public service broadcasting channel but a leader in society and a hands-on problem solver.

In its two months on air, though, ETV+ has operated mostly as a traditional TV-channel offering morning programmes, debates, films and news. As required by law, all programmes are subtitled in Estonian. While geared toward Estonia’s Russian speakers, the station’s audience is mostly ethnic Estonians. In its debut week, ETV+ attracted 294,000 viewers. Ethnic Estonians accounted for 217,000 of the total and the other 77,000 were other ethnicities. On an average day during its first week 97,000 watched ETV+. On 28 September, its first day, 120,000 tuned in to sample the new station’s offerings.

ERR board member Ainar Ruussaar pointed out that ETV+ is a long-term project to improve Estonian society and was not about ratings. Yet the failure to draw a larger share of the Russian-speaking audience in the country may put that mission in jeopardy.

ERR has a fraught history with Russian-language programming. Promotion of Estonian language and culture has always been one of its core values. This served it well while it was under the Soviet system. Later, it countered Russian propaganda. But while times changed, ERR did not sufficiently move away from its core. In the early 2000s, the broadcaster, then under budgetary pressures, cut its slate of offerings in Russian. For years after its sole Russian-language production was a little-watched news programme.

In 2007, there was a serious discussion about launching a new Russian-language station after the 27 April violence sparked by the removal of the Bronze Soldier, a World War II memorial in Tallinn’s city centre. Then the political decision in favour of the Russian-language channel in Estonian Television was only one step away and there was readiness in the Russian-speaking audience to watch it. But as the riots faded, funding to get the project off the ground faltered and the opportunity to tie Russian speakers into ERR was missed. The country’s then prime minister Andrus Ansip said it was too difficult to compete with Russian TV channels so ERR’s Russian-language offerings would be limited to radio.

ETV+ is dancing on the razor’s edge. If it covers politics too much it will raise the ire of politicians who could cut its funding. Too much pro-government propaganda could turn off the Russian-speaking audience. Lurking in the background are ratings challenges that could force it to air infotainment and entertainment programmes.

As ETV+ turns two months old, it remains to be seen how it will develop. But connecting with Estonia’s Russian-speaking citizens must be its first goal.

This article was originally posted at indexoncensorship.org

This article was updated on 5/1/16 to clarify ETV+’s viewership numbers.